Marketing Tips for Caterers from The Bachelor Pad

Over the last nine months I’ve dropped 45 pounds. It is so nice to fit into my skinny jeans. LOL.

My mission now is to strengthen my core and shed some weight from my gut. A friend recommended I try Pilates. Though the studio looked like a torture chamber, the workout wasn’t too bad.

Afterwards I had a craving for wok fried green beans from The West End Café. I am addicted. They sauté green beans in sesame oil, soy sauce, garlic, fresh minced ginger, red pepper flakes, white wine, then add sesame seeds and rough chopped cashews. I doused my to-go order with Sriracha sauce and went home to veg out on the couch.

While channel surfing I came across the final episode of Bachelor Pad. Men and women from previous seasons of The Bachelor and The Bachelorette are grouped together in a mansion for a game. The women and men pair up rather quickly, as the finals are between the last two couples remaining.

Every week there are eliminations. Strategy comes into play in this game, as alliances and a little trickery are needed to stay in it.

There is an element of love. Two of the couples from the game are still together. One of the guys proposed to his new found girlfriend.

The good thing about reality TV is you can miss the entire season and still catch up at the end. The final two couples receive votes from the other contestants to see which couple gets a shot at a quarter million dollars.

This was a no brainer. The guy on team one had betrayed two women, while the woman on the other team had her heart broken by one of the men voted out of the house. Sympathy always wins.

Now this is where the game gets interesting. The last couple standing is separated and must choose to come back on stage with a “Share” card or a “Keep” card.

During every other season, the contestants shared the money. After all, better to get half of the jackpot than risk losing it all.

The contestants came back out and, as expected, the woman picked share. To everyone’s surprise, the man picked keep. He picked up a quarter of a million dollars. 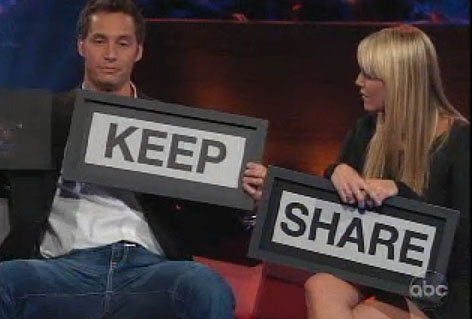 This guy had been under everybody’s radar screen the entire season. Needless to say the woman was ticked off. In the quest for her fifteen minutes of fame, she had her heart shattered and was betrayed out of a hundred twenty-five thousand dollars.

Though she had every right to be upset, it was a game. He played by the rules and outplayed her.

Now what does The Bachelor Pad have to do with you?

Every day we entrepreneurs wake up, we are thrown into The Bachelor Pad of life. Unfortunately, I don’t get to play my game in a mansion surrounded by bikini clad hotties.

But, I love the game of business. Unlike The Bachelor Pad, I must play ethically, but I have no obligation to equally share with my competitors. Neither do you.

In fact, I suggest you play the game under the radar screen.

Whereas your competitors can monitor radio, TV and newspaper to see what you’re up to, direct mail and direct marketing are virtually impossible to detect.

What’s the next promotion you have up your sleeve? Have you started strategizing your Sports Banquet, Black Friday or Holiday Catering promotions? Why not?

Just like a few Pilates classes a week will help me reach my fitness goals, an hour a day focused on marketing your catering will help you reach your sales and profitability goal.